The County Court is established in each county outside New York City. It is authorized to handle the prosecution of all crimes committed within the County. The County Court also has limited jurisdiction in civil cases involving amounts up to $25,000.

City Courts outside New York City exist in 61 cities and have criminal jurisdiction over misdemeanors and lesser offenses, and civil jurisdiction over claims of up to $15,000. Some City Courts have separate parts to handle small claims (up to $5,000), or housing matters. City Court judges act as arraigning magistrates and conduct preliminary hearings in felony cases. 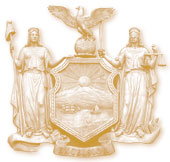